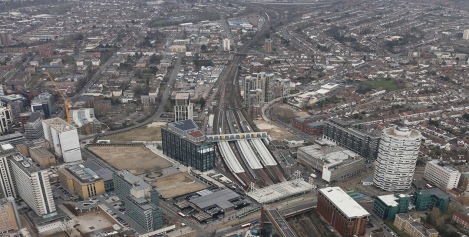 This is a message from the councillors for Addiscombe West urging you to give your views to Network Rail on the redevelopment of East Croydon Station.

We are sick of delays and having to run between platforms at East Croydon.   We are tired of sitting on a packed train outside a station while it waits for a signal.   We think you may share our feelings.

This is not a pipe dream.   Much planning has already been done.   The current technical work on “Unblocking the Croydon bottleneck” is costing fifteen million pounds.   And if the improvements go ahead,   hundreds of million pounds of investment will be made.

Network Rail want your views at this initial stage of the project.   We ask you to make your voice heard by the 17th December deadline.

The councillors for Addiscombe West will be telling Network Rail that we need and deserve a more reliable train service,  with a station that is easier to navigate,  and which meet the needs of a growing city.   We will be saying that the new station must have:

With a project of this scale there will be disruption and Network Rail needs to ensure this is managed properly,  especially if Windmill Bridge is rebuilt to allow the additional rail tracks. We must tell Network Rail to treat fairly those people whose homes and businesses are affected by the proposals.

You can also write to your councillors for Addiscombe West – Jerry Fitzpatrick,  Sean Fitzsimons and Patricia Hay-Justice – at addiscombe@croydonlabour.org.uk